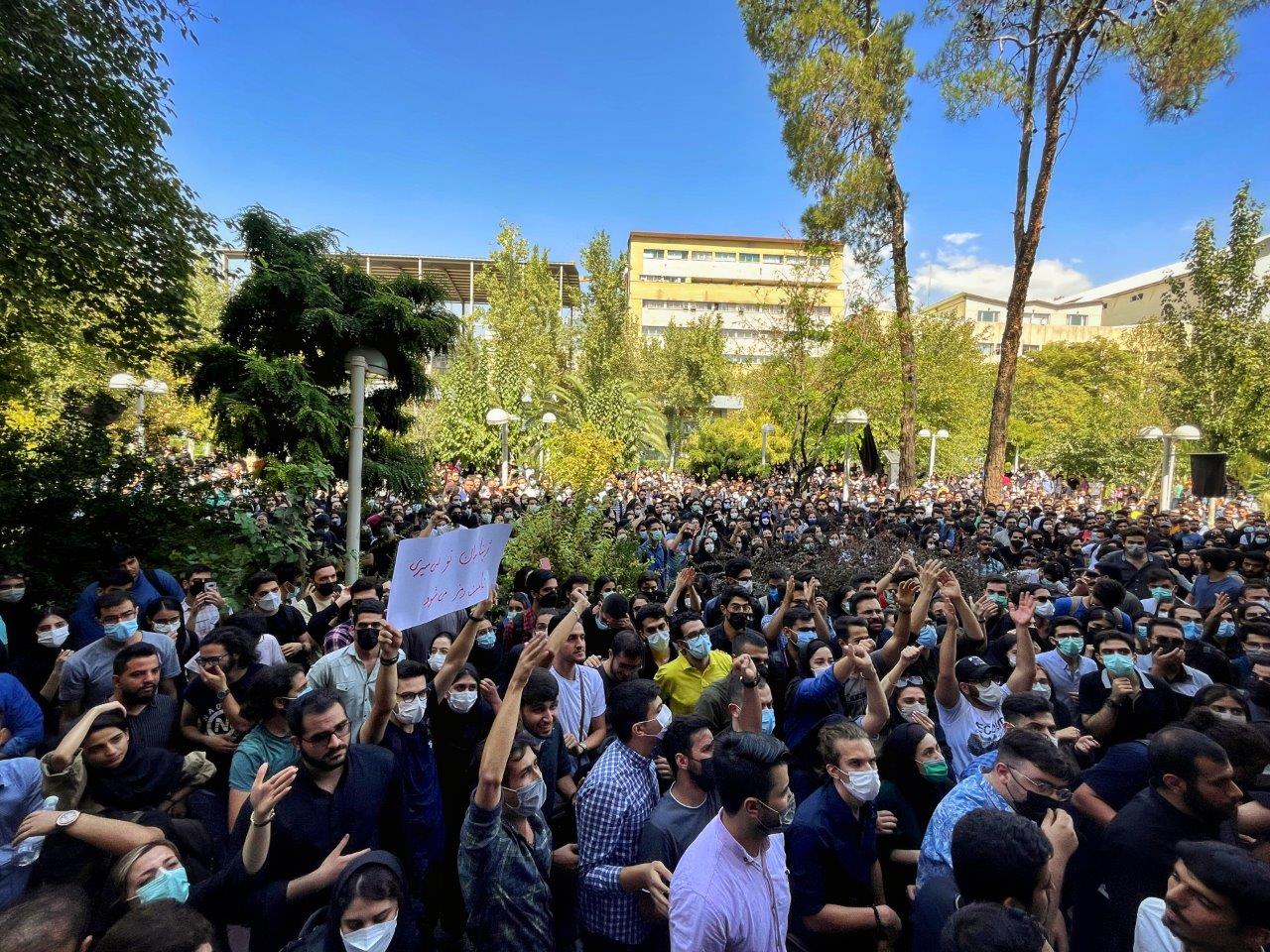 The New Iranian Revolution and the Mobilization Efforts: A First Look on the Ground

Tehran, Iran- The months following the death of the Iranian woman Mahsa Zhina Amini has led to one of the most unprecedented and united social movements seen in the state of Iran for decades. The scale and show of resilience among protesters and activists alike, especially among the younger demographics, has shown their solidarity towards seeking change in their government and institutions after decades of frustration and anguish.

Election of Ebrahim Raisi as President

The election of Ebrahim Raisi as President of Iran back in 2021 is said to have caused a stronger domestic shift to Iran’s policy. His election victory is seen as controversial as members of the Iranian Guardian Council (a council that evaluates the constitution and governing laws headed by the leader Ayatollah Khamenei) disqualified many candidates from running which included moderates and former members of the government, his association with Ayatollah Khamenei, and international condemnation over his track record of human rights while serving in different committees.

Unsatisfied and angered, many Iranian citizens, especially those who supported reformist efforts, decided not to vote in the election upon noticing the rise of Raisi. The election in 2021 saw the lowest turnout in an election in Iran since its initial revolution back in 1979. Something which did not go unnoticed as Raisi was able to secure 18 of the nearly 29 million votes cast and won in a landslide. Ebrahim Raisi is a cleric who is considered to be a religious-conservative hardliner on the various Islamic laws that encompass Iran.

The religious foundation came about as the 1979 revolution established the rule of the Ayatollah, who is seen as the highest religious cleric of Islam, with the subsequent laws and societal norms having to fit into the Islamic agenda. In the past, controversy surrounded the government over the harsh laws and treatment of those who defy the stringent laws set out by the government. Which resulted in mobilization efforts and international condemnation over potential human rights violations and enforced rule through the military via its security forces and the Iranian Revolutionary Guards.

The Iranian Revolution of 1979 saw the rise of Ayatollah Khomenei and the Guardian Council that essentially oversees and wields authority in the state of Iran. From direct appointments to wielding the power to alter the constitution to directing the military forces; the current governing institution is seen as a consolidated one with no real methods to check the authority of the Ayatollah. The revolution brought about a change in the direction of the nation as it is seen to have shifted to one more traditional and religious practice. With specific prominence going to notions surrounding Women and their strict dress codes, places of worship, and public demonstrations.

Forms of movements and mobilization efforts by protesters appeared sporadically but increased around various election cycles and turbulent moments. From the controversial 2009 election cycle that saw the outcry of voter suppression and fraud targeting the reformist candidate Mir-Hossein Mousavi, to the 2012 Arab Spring movement that was later on unable to pick up traction due to efforts by the military. These efforts, as a whole, stemmed from the perceived injustices of the Government in retaining such power and implementing measures that were seen as repressive and dangerous to the citizens of Iran. Especially with the direct enforcement of laws by the military which received its fair share of condemnation internationally over their actions to those detained.

The Case of Mahsa Amini

The Iranian Morality Police, who enforces the interpretation of Sharia law and norms from the government, arrested the 22 year old in Tehran this September for incorrectly wearing her hijab. She later on passed away with her family claiming that her death was the result of the actions of the Morality Police in striking her on the head several times, while the Security Forces claimed that she suffered a heart attack while receiving education with regards to the hijab law. However, with the already controversial track record of the Morality Police and a lack of transparency in the subsequent arrest and detainment of Mahsa Amini, the movement that it started was unlike many that preceded it.

From international condemnation to an already riled up population, her death sparked tremendous pushback for change in the government; but unprecedented circumstances have pushed the calls much further. From the unity that surrounds the majority of ethnicities, which have previously made mobilization efforts difficult, to the undeterred resilience among the younger population; to even a mass movement among women by defying the various dress codes and calls for better gender equality, the movement has taken on a new dynamic for justice and equality.

2022 Iranian Revolution and the Mobilization Efforts Made

We at RaiseTheVoices have been able to interview a citizen and observer of the current mobilization efforts in the state of Iran, which helps to tie it all into the historical and social fabrics of the nation. For safety purposes, the identity of this contact will not be stated but does provide tremendous help in understanding the current underpinnings from activists.

From their account, the current state of this mobilization and pushback efforts is something much more than just calls for simple reform. As they state, the people of Iran are too tired of the same old tactics of promising change and for it to never amount to anything. Instead, the people want more; a Revolution. One whose efforts will promise the changes they seek and one that many will lay their lives on. The dynamic as well seems to be different as the issues now encompass a broad array of topics such as Gender equality, Economic restructuring, LGBTQ rights, the separation of church and state, Governmental imbalance in power, etc.

The witness states how the Iranian government engages directly in corruption and repression. Including the use of dead names to string them as supporters of the regime, government censorship of events and direct manipulation in the media such as television as to why protests occur, the attempts the government has made in tying these protests as something that occurred as a result of the West to undermine their struggles, and more repressive tactics by the military. Which coming from the statements given, show a collusion with the government entirely through being under its direct rule and being regularly funded to use against people such as arrests, torture, and other means to suppress movements.

Despite such methods the government uses to repress information and mobilization efforts, they still occur and are rampant. With the advent of social media, the amount of information that spreads is rapid and covers a wide array in society. Even then, our witness states that information is also generally gathered on the ground and spreads through word of mouth (of course, in secret). From this, the people are more informed of the actions of the government and are better prepared for potential consequences, but this has caused a backsliding of sorts as the government now imposes even more strict and repressive measures to clamp down on mobilization efforts; which can oftentimes get violent despite the vast majority of protesters being unarmed and do demonstrations peacefully.

The EuroNews television news network, states the amount of those killed or injured (from the Hengaw Organisation for Human Rights), which is in the majority by young people, is at least 201 with figures such as 24 children and hundreds more being killed or injured. However, the network claims that the statistics may be a lot more either out of the government suppressing such information or simply the amount of disappearances that regularly occur. However, the figures appear to be different as our witness has stated that the figures are more so over 450 that were killed in the past eight weeks and over 17,000 people were supposedly arrested.

Overall, the mobilization efforts that were conducted back during the events of 2009 and 2012 shows the amount of anguish felt by many in Iran. Especially considering how many of these mobilization efforts failed and caused many to simply distrust their government and its various officials and how it operates and instead seek change. Real change in something more than a simple protest.

Our witness, lastly, described the need for the international community to recognize the Iranian revolution that is occurring and for governments to take steps and address this issue. Such as the closing of Iranian embassies, exchanging open dialogue with leaders of the opposition in Iran, establishing flight zones to ensure that the current leaders stay within their nation to possibly not flee, for support internationally for protesters, and for involvement in the toppling of such a regime.

Hope is to be raised over the fact that many are undeterred, despite such repression, in their efforts to secure a more democratic and free nation.