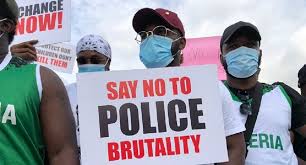 It has been more than a month since peaceful #EndSars protesters were gunned down by Nigerian military forces at Lekki tollgate on October 20, 2020. Both the national and international outrage and demands for justice were immediate, yet the Nigerian government’s response has been anything but.

In his first public address following the incident, President Buhari neglected to so much as mention the shooting. In a follow-up address a few days later, President Buhari clarified that his omission was due to not yet having all the facts but promised justice for those killed in the incident. Nearly five weeks later, no “facts” have been established. There has been no conclusive government investigation. No accountability. The Nigerian military initially denied being present at the tollgate. Subsequently, they admitted the presence of soldiers, but claimed they only fired blanks into the air. In a further twist, a Nigerian military representative testified last week before a Lagos Judicial panel of inquiry that both live and blank bullets were given to soldiers and that the orders to clear the tollgate came from Governor Sanwo-Olu of Lagos State. In his own statement, the governor stated that the military is not under the jurisdiction of state governors. The volleying of blame has sustained confusion as to who bears true responsibility for the military assault. Despite its failure to establish culpability in the slaughter of its citizens, the federal government found ample time to write a letter lambasting CNN’s investigative report that concluded military personnel had in fact shot at peaceful protesters in Lekki. Unfortunately, all of this is predictable for a notoriously corrupt and apathetic government.

Through its rhetoric, the government feigns compassion for its citizens, but consistently falls short on action. The government has shown an alarming commitment to deterring further #EndSars protests. From utilizing the military to freezing bank accounts, it freely exploits any system at its disposal to threaten, punish, and bully activists. For all its promises regarding disbanding SARS and securing justice for victims, the Nigerian government’s actions have displayed only a firm intent to maintain the status quo and silence any opposition.

Some Nigerians have literally put their money where their mouths are by closing their bank accounts at complicit banks. This represents an act of meaningful solidarity, and show of resistance to the banks’ cooperation with the government’s crackdown. But the core problem remains— the government’s unchecked overreach. This overreach is so dangerous that it has forced banks to alienate their law-abiding patrons and consequently lose business.