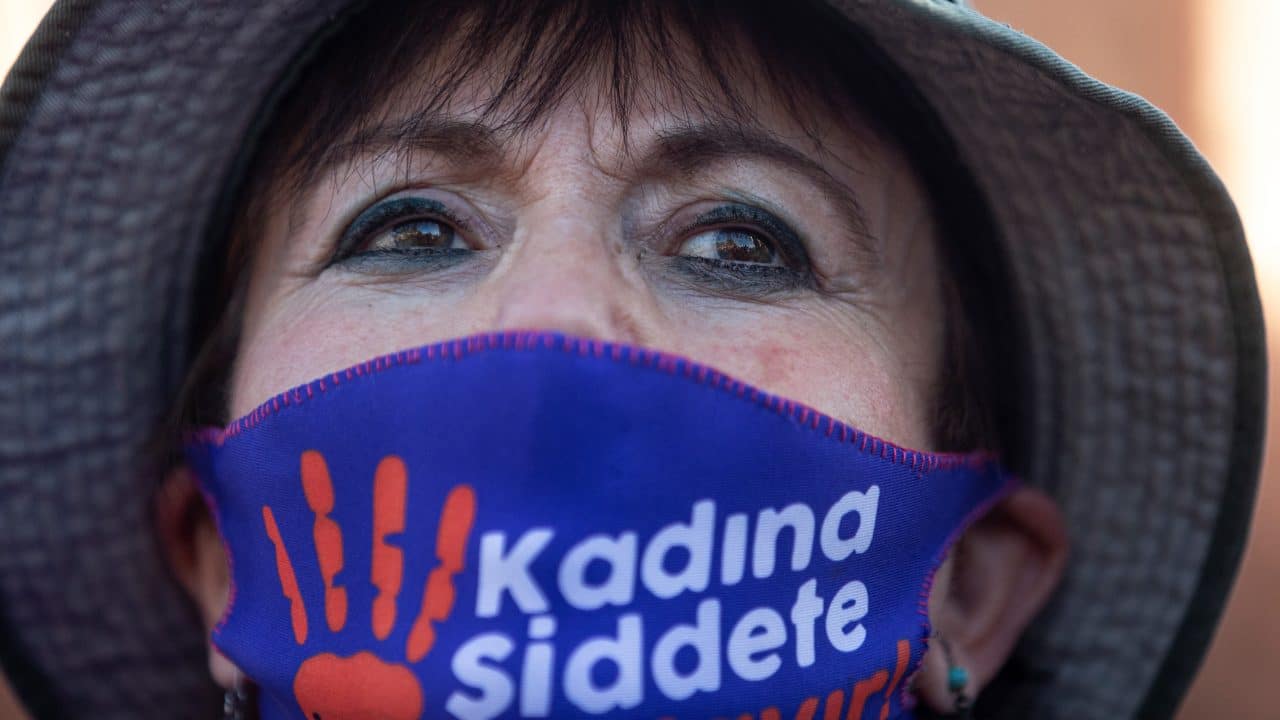 Is Turkey betraying its girls and women?

By Gabby Silberman and Nina Keese

In reports from 2009 and 2014 [Turkish only], Mor Çatı (Purple Roof Women’s Shelter Foundation), a Turkish NGO combatting violence against women, shone a light on the widespread and deeply rooted nature of violence against women in Turkish society. In 2020, gender-based violence (GBV) remains more than ever a systemic issue in Turkey, and the failure to adequately address it has led to numerous deaths and destroyed countless lives.

Broken legs, arms, hands. Brain damage. A baby born with a deformity because its mother was severely battered during pregnancy. These are just some of the outcomes of the violence that women faced in Turkey in 2009. Eleven years later, in 2020, the situation is still dire. Although Turkey passed important legislation to protect women against violence in 2012,  following its signature of the Istanbul Convention, domestic violence remains widespread and femicides are increasing yearly. In 2018, around 41% of Turkish women were estimated to experience domestic violence throughout their lifetime, compared to 39% in 2008. And while the average of women who have experienced physical or sexual violence by their partner is 25% across Europe, in Turkey, this rate is 38%.

These figures must be understood in light of both the nature of GBV and its impact on women’s lives. Violence is gender-based when it affects a gender disproportionately, or is inflicted on a person because of their gender (Istanbul Convention, Article 3(d)). This constitutes a violation of human rights. As well as physical violence, gender-based violence includes acts that result in physical, sexual, psychological, and economic harm (Article 3(a)). Male partners, relatives, or even strangers often inflict a combination of these different types of violence on women, disempowering them through a range of abuse and intimidation which negatively affects many aspects of their lives.

Violence sometimes spans the entire course of its victim’s life, beginning in childhood and continuing into adult life. In the Mor Çatı reports, the majority of women had suffered from abuse at the hands of their fathers while growing up. At a young age, they sought salvation in a romantic relationship that would enable them to escape from the family home. Yet before they knew it, their partner was verbally and emotionally abusing them; raping them; and beating them with sticks, belts, or burning iron. Increasingly isolated from others, they found themselves trapped in a destructive relationship.

A recurring issue in the stories collected by Mor Çatı relates to the education received by girls. In particular, girls brought up in highly conservative families described how they had been taught to serve the men in their family and had often been extremely restricted in leaving the house to spend time with friends – let alone boys – or pursue their interests and hobbies. Having been isolated from the outside world and restricted in their personal development, it was difficult for them to oppose or even recognise abuse in their adult life.

However, victims of GBV do not necessarily come from a background of violence, or a conservative background. Gender-based violence affects women of all socio-economic classes, all ages, and all backgrounds (2014 Mor Çati report, p. 31 [Turkish only]). It occurs in big cities as well as small villages; and in progressive regions as well as conservative ones; as the murder of Pinar Gültekin by her ex-boyfriend in Muğla, a region in Turkey’s southwest reputed for being among its most progressive, well illustrates. Gender-based violence takes over a woman’s life, regardless of her background, and she has to fight to retain or regain control of it.

However, fear keeps many women from seeking help or taking action to end the violence. Fear that their abuser will find out and the violence will worsen. Fear that their children, parents, or other family members will be endangered. Fear of an uncertain future for themselves or their children. Fear, often rightly so, that they will not receive adequate or timely help. Thus, a study from 2015 found that only 11% of women subjected to violence in Turkey applied to an institution to obtain help, and that most women only applied when they got to a point where they could no longer physically and mentally endure the violence.

Victims of gender-based violence, and in particular domestic violence, also face hostile social attitudes: they are often made to feel, at best, that they should accept their situation, and at worst, that they deserve it.

The perpetuation of patriarchal values

While Turkey championed the Istanbul Convention ten years ago, it is now drifting further and further from promoting women’s empowerment and securing women’s rights. In 2020, Turkey ranked 130 out of 153 on the Global Gender Gap Index, falling 27 spots since 2007. The index measures women’s economic participation and opportunity, educational attainment, health and survival, and political empowerment in a given country. Scoring poorly on the gender gap index suggests a high level of adherence to patriarchal values, and these values are intrinsically linked to gender-based violence.

In a patriarchal value system, men’s worth is defined by their power, including their ability to get what they want from women, and women’s worth is tied to their ability to please and serve men, including their partners and relatives. In such a system, a man may try to assert or reassert his domination by using violence against women; while some perceived failure by a woman to comply with a man’s wishes can be used to excuse or even condone violence. And in such a system, women become scapegoats and stress balls for men’s economic and social failures. These dynamics transcend countries and cultures, and the stronger they are, the more difficult it is for victims to break out of a cycle of violence and abuse.

In Turkey, the attitude of the AKP ruling party and increasingly powerful conservative groups has strengthened the patriarchal value system, while undermining efforts to achieve gender equality. For years, the government has had an ambiguous position, sometimes adopting pro women’s rights discourses to please international groups, and other times undermining those very rights to please conservative religious groups. However, Erdogan’s government increasingly favours the latter position, regularly making sexist remarks and defending the narrative according to which attempts to protect and promote women’s rights threaten to destroy family values. For instance, President Erdogan has stated that treating women and men as equals goes “against nature”, and has criticised women who decide not to have children as rejecting motherhood, labelling them as “deficient” and “incomplete.” These comments reflect a view of women as lesser humans and have a major impact on Turkish men’s perspective of themselves and women.

Together with this, state officials and the media fail to treat gender-based violence as a social problem, ignoring its cultural and political context. When reported, incidents are sensationalized and treated as isolated cases, emphasizing the fragility of women and contributing to sexist stereotypes rather than focusing on root causes. Yet the media has the potential to raise awareness about gender-based violence and gender inequality, including by relaying the crucial work carried out by Turkish civil society organisations on these issues. These organisations should also receive active support from the government.

Although women are protected on paper, practical efforts to ensure that violence against women decreases are vastly insufficient.

The disengagement of justice and politics

Following its signature of the Istanbul Convention and shortly before ratifying it, Turkey adopted Law nº 6284 to Protect the Family and Prevent Violence Against Women (2012). Enacted to transcribe into national law the standards laid out in the Convention, the law led to the creation of several mechanisms for the prevention of gender-based violence and the protection of individuals against it.

In practice, however, these mechanisms have fallen short of the standards in Law nº 6284. For example, Centres for the Prevention and Monitoring of Violence (“ŞÖNİM”) were created to make it easier for victims to bring complaints and to coordinate the process. Yet according to the 2014 Mor Çati report cited earlier, these centres, from their inception, have been highly bureaucratic, failing to ensure the safety of persons at risk of being subjected to violence.

There are long delays and restrictive criteria for requests to be placed in a shelter, effectively forcing victims of domestic violence to keep on living under the same roof as their abusers. Women often have to wait months for a trial or a divorce procedure, during which time they continue to be subjected to or at risk of violence. In addition, breaches of confidentiality have been reported concerning the address of women who changed their residence to escape violence. All these deficiencies in the implementation of Law nº6284 contribute to abusers’ belief that using violence is acceptable, and showcase a lack of political will to take the issue seriously.

These are not just bureaucratic issues. Poor implementation stems from authorities’ attitude towards violence against women: rather than a crime, domestic violence is perceived by many as a family matter that does not warrant the interference of law enforcement. Therefore, women are discouraged from taking any judicial action, while abusers are often given only minor punishments. The message is that violence may (or may not) be regrettable, but it is a normal component of relationships between men and women.

As early as 2009, the European Court of Human Rights had found that the failure of Turkish officials to take action in the face of gender-based violence was a form of discrimination against women, yet a 2018 Council of Europe report found that Turkish authorities are still reluctant to take gender-based violence seriously (see para. 278). The report highlights that Erdogan’s purge of the judiciary following the attempted coup of 2016 is of particular concern for the protection of women against violence (para 276).

The idea that gender-based violence is a family matter – even though authors of GBV include strangers, ex-boyfriends, stalkers, etc – is a major argument made by religious conservatives for withdrawing from the Istanbul Convention. The Convention, and Law 6284, are perceived by these groups as threats to family unity. This current attempt to undermine protections against violence against women is particularly worrying given the increase in domestic abuse in the context of the Covid-19 pandemic. Unless the causes of gender-based violence are truly and effectively addressed, the government will have to answer for shattering many more lives.

Published in Turkey and Women's Rights