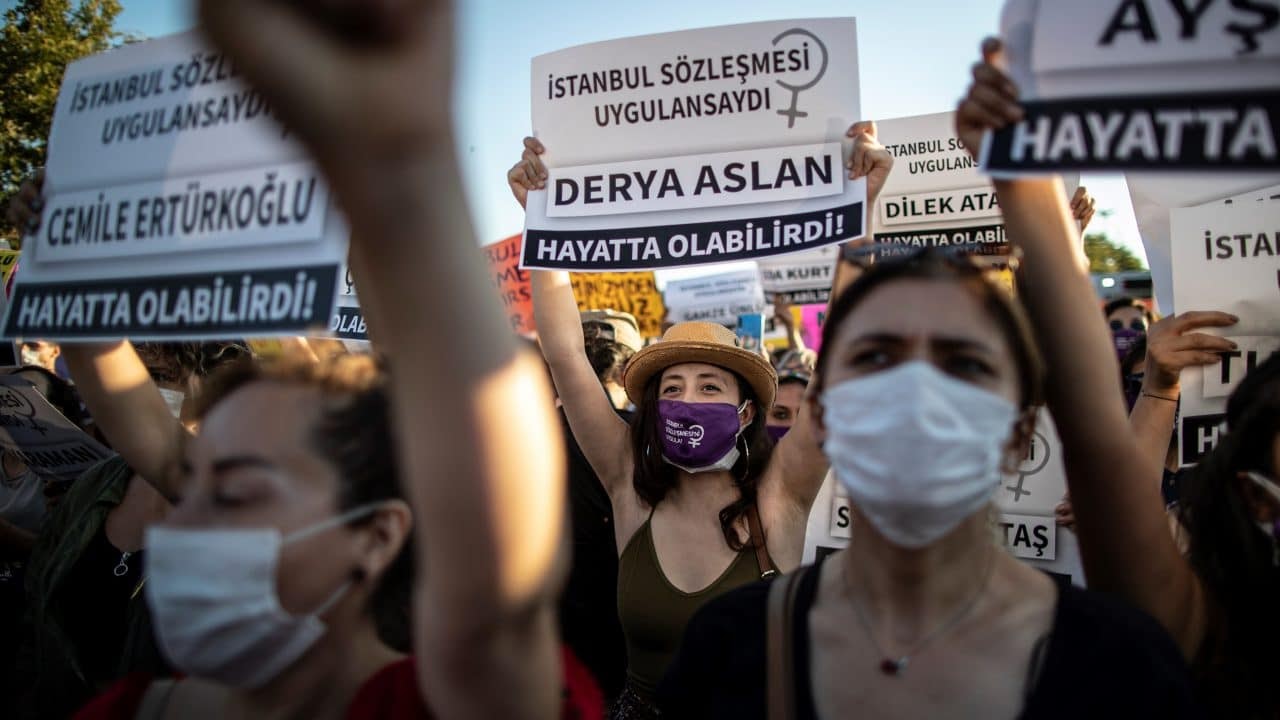 Amidst rising gender-based violence and major protests across the country, the Turkish government is considering withdrawing from the Istanbul Convention. This landmark human rights treaty sets obligations for states concerning the prevention of violence against women and domestic violence, protection against violence, and prosecution of abusers.

What is the Istanbul Convention?

According to a 2014 study, one in three women in the European Union (EU) have experienced some sort form of physical and/or sexual assault since the age of 15. Further, 35 percent of women worldwide have been subject to physical or sexual violence by a partner or stranger. The Istanbul Convention is intended to protect women from violence, and ensure the prosecution of perpetrators.

The Council of Europe Convention on Preventing and Combating Violence Against Women and Domestic Violence, informally known as the Istanbul Convention, opened for signature in 2011, with Turkey as its first signee and ratifier, and virtually every European state following suit. This convention, a human rights treaty, is the first to provide a legally binding set of guidelines, a legal framework and an approach to combatting violence against women, as well as require states to establish services such as hotlines, shelters, medical services, counselling, and legal aid.

Contents of the Istanbul Convention

Under the Convention, states’ responsibilities  include preventing all forms of violence against women, protecting those who experience violence, investigating allegations of violence, and prosecuting perpetrators. States must also actively promote equality between women and men, encourage mutual respect or non-violent conflict resolution, and questioning gender stereotypes.

The Effect of the Convention in Turkey

Pursuant to its signature of the Convention, Turkey adopted Law No. 6284 to Protect the Family and Prevent Violence Against Women. This law filled gaps within the state’s domestic violence laws, which only protected married women: they now extend to all women, married or not, as well as children and other family members. The government also reportedly began flagging individuals known to be violent and even created an app allowing women to alert police if they are in danger. Yet these apparent efforts to combat gender-based violence have proven far from sufficient to live up to the Convention.

Domestic violence killed an estimated 474 women in Turkey in 2019, and four out of 10 Turkish women are reported to experience sexual or physical violence at least once in their lives. The number of women killed in Turkey continues to rise year after year, and COVID-19, specifically its mandated lockdowns, has led to spikes in reports of violence against women and girls, with many stuck at home with their abusers. The recent murder of Pinar Gultekin by her ex-boyfriend in July 2020 led to mass protesting across Turkey’s major cities and to a viral black and white #ChallengeAccepted social media photo challenge. Gultekin’s murder, combined with the Turkish government’s failure to appropriately implement the Istanbul Convention, and now the possibility of withdrawal from the Convention, has created mass protests and a divide within President Erdogan’s political party, ultimately leaving the fate of the Convention hanging in the balance. Indeed, various Turkish politicians and leaders have claimed that the Convention threatens the traditional perception of a family.

Although the European Convention carries the name of a Turkish city, evoking a time when the Turkish government was oriented towards bringing about progress in gender equality and human rights, its legitimacy is being questioned today by leading members of the Turkish government. Erdogan entered office with progressive policies, perhaps to secure Turkey’s entrance into the EU, but has since shifted to conserverative and Islamist policies, now openly pursuing a religious agenda. This shift has allowed conservatives in Turkey to have a stronger voice. Many of the latter argue that the Istanbul Convention undermines family structures and that the traditional Turkish family model is becoming fragmented due to gender equality laws, as they view women’s primary position as housewives and mothers. The Convention has also been accused of “promoting LGBT ideology” as the principles of gender equality and non-discrimination on the grounds of sexual orientation are interpreted by some conservatives as promoting homosexuality, which is against their values.
Moreover, right-wing groups, nationalists, and conspiracy theorists also believe that the Convention is an attack on Turkey’s national sovereignty, a foreign attempt to control Turkey. As a result, conservatives are urging Erdogan to abandon the Istanbul Convention and Law No. 6284, two major accomplishments for women’s rights and gender equality. On the other hand, women’s rights advocates in Turkey are pushing for the Convention to be implemented, as the current system fails to prevent violence and allows perpetrators to go unpunished. A final decision has yet to be made as President Erdogan navigates competing interests within his party and will have to face the consequences if he decides to withdraw: this would likely result in major protests and unrest, while eliminating the country’s chances of joining the EU – as it would run contrary to the Union’s values.

Published in Turkey and Women's Rights