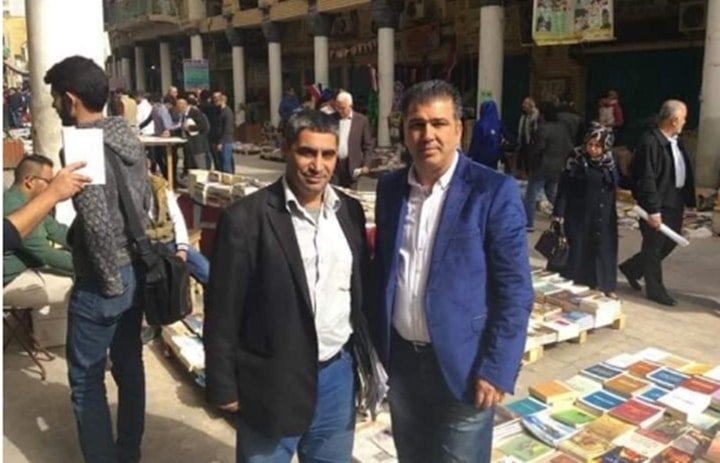 It has been more than one year since Tawfiq al-Tamimi, an editor of regional news for the Iraqi government-affiliated daily Al-Sabah, was kidnapped by unidentified individuals. To this day, his whereabouts still remain unknown and unaddressed by authorities.

On March 9, 2020, unidentified gunmen abducted al-Tamimi in the eastern Baghdad neighborhood of Ur as he was on his way to work.

The following day, a statement by the Iraqi National Union Of Journalists quoted Ali al-Fawaz, editor-in-chief of Al-Sabah, as saying that “al-Tamimi has no problems outside the field of journalism and until now we don’t know the reasons for his abduction.”

Al-Tamini is a “bold journalist” who “stood with the truth” and gave voice to the oppressed, says Iraqi journalist and human rights activist, Ali Al-Mikdam.

“His disappearance is an important loss for the Iraqi journalistic community,” adds Al-Mikdam.

The Abduction of Iraqi Journalists is Not Unusual

Since protests erupted in October 2019 over widespread corruption, general unemployment and a lack of basic services, at least two other Iraqi journalists have been kidnapped – and an additional three more killed.

Iraq is ranked 162nd out of 180 countries in the 2020 World Press Freedom Index compiled by ‘Reporters Without Borders’.

Although al-Tamimi’s family have not received any official information concerning the enforced disappearance, they believe he was abducted by a militia acting on behalf of the state, in retaliation for comments he made on his Facebook account.

Two days prior to his abduction, al-Tamimi posted a picture of himself alongside missing author Mazen Latif, asking for the author’s release. Latif had been kidnapped under similar circumstances on February 1, 2020, by unidentified men in Baghdad.

Al-Tamimi also used his account to voice support for the wave of anti-government protests.

Last July, newly appointed Iraqi Prime Minister Mustafa Al-Kadhimi met with al-Tamimi’s family and told them there was an ongoing investigation into the kidnapping. He added that he would be returned home as soon as possible. However, the government has shared no developments whatsoever on the case since then.

Although the government has not provided a satisfactory explanation on the assassinations of activists and journalists, Iran’s Islamic Revolutionary Guard Corps—a major military, political and economic force in the country—have been suspected given the involvement in the protests of the Popular Mobilization Forces, the Shia militia group which they back.

The IRGC are notorious for carrying out assassinations, executions and imprisonments to crush domestic opposition. RSF claims that at least 860 journalists and citizen-journalists have been imprisoned or executed since 1979, making Iran one of the most dangerous countries for journalists over the course of the last 40 years.

Their methods of oppression and violence have been progressively expanded to other countries where Iran wields influence, like Iraq, where IRGC-backed militias harass activists and journalists who are deemed a threat to Iran’s interests in the country.

The Committee to Protect Journalists called on Iraqi authorities to ensure that journalists can safely carry out their all-too-important work without fear of reprisal—or worse.

“The abduction of Iraqi journalists is a very concerning trend that threatens press freedom in Iraq at a time when a free flow of information is more necessary than ever,” Ignacio Miguel Delgado, CPJ Middle East and North Africa Representative in a statement last year, tells Raise The Voices.