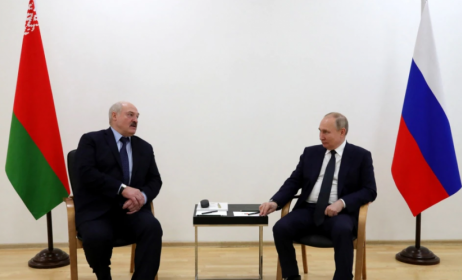 “Destruction”: The Current State of Independent Media in Belarus.

A map of Belarus and nearby countries.

Belarus is an oppressive dictatorship with an abysmal human rights record. According to Human Rights Watch, “Belarus is the only European country to use the death penalty. Those condemned to death are executed by a shot to the head. Authorities do not inform families of the execution date or the burial place.” Recently, Belarus adopted a new law introducing the death penalty for “Attempts to carry out acts of terrorism.” The law, which could be vaguely interpreted, is against Belarus’ international obligations and violates human rights.

Belarus is effectively controlled by Alyaksandr Lukashenka, who has been in charge since 1994. Belarus’ constitution establishes that it is a democracy. However, Lukashenka amended the constitution in 1996 to allow him more power and effectively allow him to rule indefinitely. Lukashenka is also a close ally of Putin and provided support for the Russian invasion of Ukraine.

Lukashenka’s re-election in 2020 was not recognized by the United States as free and fair and led to mass protests in Belarus that were violently suppressed. Journalists who covered the protests were arrested. (Amnesty International)

From January to November of 2021, 184 journalists were at one point detained, fined, or the victims of excessive force. (U.S. State Department). Notably, in May 2021, the Belarusian Government forced a landing of a plane because it was carrying a journalist who had published information critical of the regime. Boris Gorezkij, the Deputy Chairman of the Belarusian Association of Journalists, compares being a journalist in Belarus to, “Walking through a minefield.” (Deutsche Welle), because of the difficulty in providing accurate reporting without being arrested.

Gorzekij says that as part of its crackdown on free media the Government of Belarus has mostly stopped accrediting foreign journalists who want to report on events in the country, and canceled accreditations for people who are already there. There are some exceptions to this however, certain Russian journalists have been able to keep accreditations as well as receive new ones. Human Rights Watch and Gorzekij both discuss that journalists in Belarus don’t want to wear press vests, because they believe they put themselves in greater danger by doing so.

Human Rights Watch also reports that journalists who cover the protests have been sent to prison, as well as treated as though they participated in the protests. 28 journalists are currently under arrest and are considered political prisoners. There have also been numerous instances of journalists in Belarus being mistreated while in prison. Human Rights Watch says that this includes, “Inhumane detention conditions and denial of medical assistance, in reprisal for their work.”

The government has also made it much harder for people to be able to access independent media. A number of Belarusian printing companies, which are predominantly state-owned, refuse to print newspapers, which has made it more difficult for journalists to spread their reporting. Belarusian authorities labeled the Belarusian service of the Radio Free Europe/Radio Liberty as “Extremist” and blocked access to its website. Two journalists of the RFERL are imprisoned.