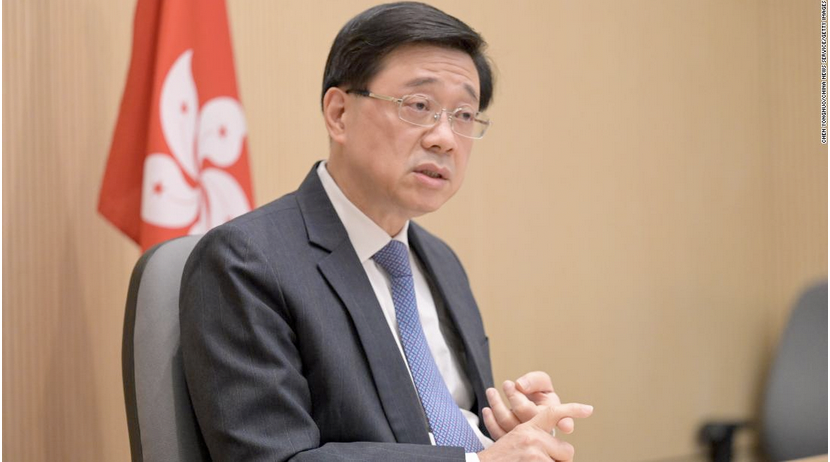 Top: John Lee, the next leader of Hong Kong.

Bottom: A map of Hong Kong

Hong Kong has long been known for its freedom, which is now being stripped away. The next leader of Hong Kong will be John Lee, who has previously served as Secretary for Security. He was chosen with the support of Beijing, and has a history of abusing Human Rights. He claimed that police did not act violently towards peaceful protestors, and that the protests were violent towards the police. This is not accurate. He has also praised China’s treatment of the Uygurs.

It is important to understand the historical context behind recent events in Hong Kong. In 1842 Hong Kong was ceded by China to the United Kingdom. In 1898, the two countries made an agreement where The U.K. would lease Hong Kong for 99 years. In the late 1970’s the British and Chinese governments started to think about what would happen when the lease expired.

Active negotiations began in 1982, and concluded on December 19, 1984, when the U.K. agreed to hand over Hong Kong to China on July 1, 1997. In 1990, the National People’s Congress of China approved the Hong Kong Basic Law, which was based on the now-famous principle of, “One country, two systems.” Hong Kong is supposed to be largely autonomous for 50 years starting from the handover, meaning from 1997-2047.

However in recent years that has changed. Despite its legal obligations, China has infringed on the rights of Hong Kong. Mass arrests have been used as a tactic to deter people from protesting. Describing the situation, one protester said, “it’s very important that the world continues to pay attention to what’s happening in Hong Kong, that we don’t even have the right to vote or protest anymore.” (The Washington Post)

The process that was used to elect Lee was different this year than it has been in previous elections. In previous years, many candidates ran. This year, Lee ran unopposed. Candidate for Chief Executive are nominated by members of the Election Committee, who choose the Chief Exectuive. Lee was nominated by over half of the committee members, and was the only candidate nominated. The Election Committee was made up entirely of close allies of Beijing. This fits with the recent pattern of Beijing caring increasingly that it has the loyalty of Hong Kong leaders.

Lee has spent most of his career working in law enforcement in Hong Kong, and became Secretary of Security in 2017. He oversaw the implementation of the National Security Law, which has been used to target pro-democracy activists, many of whom have had to leave Hong Kong for their safety.

Even before he officially took office, the situation in Hong Kong has gotten worse. “Hong Kong authorities have barred some local and international media from the inauguration of the new chief executive, citing pandemic restrictions and security reasons.” (The Guardian). This happens while Lee claims that the free press in Hong Kong is, “Unlimited.”

This has not happened before. Media outlets banned from attending Lee’s inauguration have been allowed to attend similar events in the past. Banning these outlets fits with Lee’s record. CNN reports that he is in favor of further restricting independent media, which is already heavily restricted in Hong Kong. He has also supported restricting other human rights as well, which have previously been described.

Based on Lee’s prior record, he will likely continue to restrict Human Rights in Hong Kong. Though he has been sanctioned by the U.S., it is important that action is taken to ensure people in Hong Kong’s rights are protected. Individuals can spread information about the situation in Hong Kong to help raise awarness about this situation.

Published in Hong Kong and Uncategorized