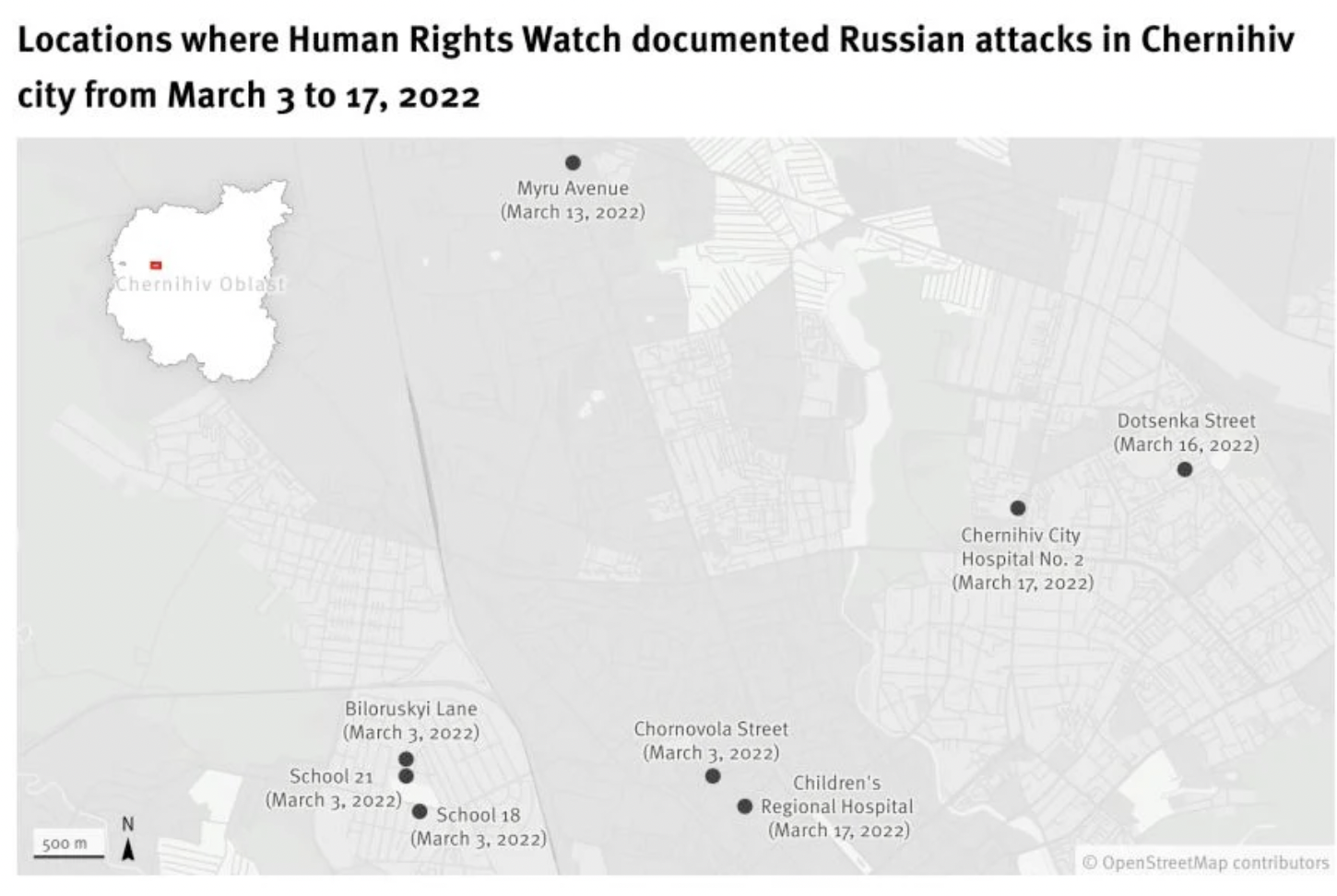 “Horror Story”, were the words used by Michele Bachelet, the U.N. High Commissioner for Human Rights, to describe the situation in Ukraine. According to the Ukrainian government, there is documentation of 14,000 war crimes committed by Russia (NPR). These include targeting civilians and enforced disappearance. Russia has repeatedly violated International Law and committed war crimes and other human rights violations in Ukraine, as well as against people in Russia who have spoken out against the invasion.

Deliberate targeting of Civilians is forbidden by the Laws of War. “Direct attacks against civilian objects—such as homes, apartments and businesses, places of worship, hospitals, schools, and cultural monuments—are prohibited unless they are being used for military purposes and thus become military objectives.” (Human Rights Watch). If the status of something is ambiguous, then it is to be treated as civilian. International law requires all parties involved in a war to minimize or avoid hurting civilians, and give advance warning if possible.

According to Belkis Wille, the Senior Crisis and Conflict Researcher at Human Rights Watch, “Russian forces in March repeatedly attacked populated areas in Chernihiv from the ground and air with seeming disregard for civilian loss of life”. Human Rights Watch has also documented summary executions of Civilians.

As of April, the U.N. has documented 114 attacks on medical facilities, with the real number likely being higher than that. This is a violation of human rights, as well as the laws of war as stated above.

Aleksei Gorinov is a Moscow Municipal Councillor who is being prosecuted for speaking out against Russia’s invasion of Ukraine. Officially, Gorinov is being tried for, “Knowingly spreading false information.”

Enforced disappearance of Ukrainian civilians has been documented 200 times between when the invasion began and the end of May. One case involved a teacher named Viktoria Adrusha who was in the Chernihiv area, and was disappeared when Russia withdrew.

Arbitrary detention has also been documented (World Organization Against Torture). People who are detained have not been allowed to meet with a lawyer, and lawyers who have tried to visit detained people have been denied access. Families of the detained are also unable to communicate or receive updates.

While it is legal to detain civilians under certain conditions, the detention must be acknowledged, and the whereabouts of the detained has to be disclosed. Not doing these is considered to be enforced disappearance, which is a crime against humanity.

International law is clear that anyone who commits, orders, or aids in committing a war crime are criminally liable. This includes commanders who should know if war crimes are being committed and do nothing to stop them.

So far, there has been some accountability for Russia. So far two Russians have been convicted of war crimes, and there are currently 80 cases in progress (NPR). Russia has been removed from the U.N. Human Rights Council, and is under investigation by the International Criminal Court. (ICC).  However the ability of the ICC to hold Russia accountable is limited, because though Ukraine is under its jurisdiction, Russia withdrew from the Rome Statute in 2016, meaning Russia is no longer part of the ICC.