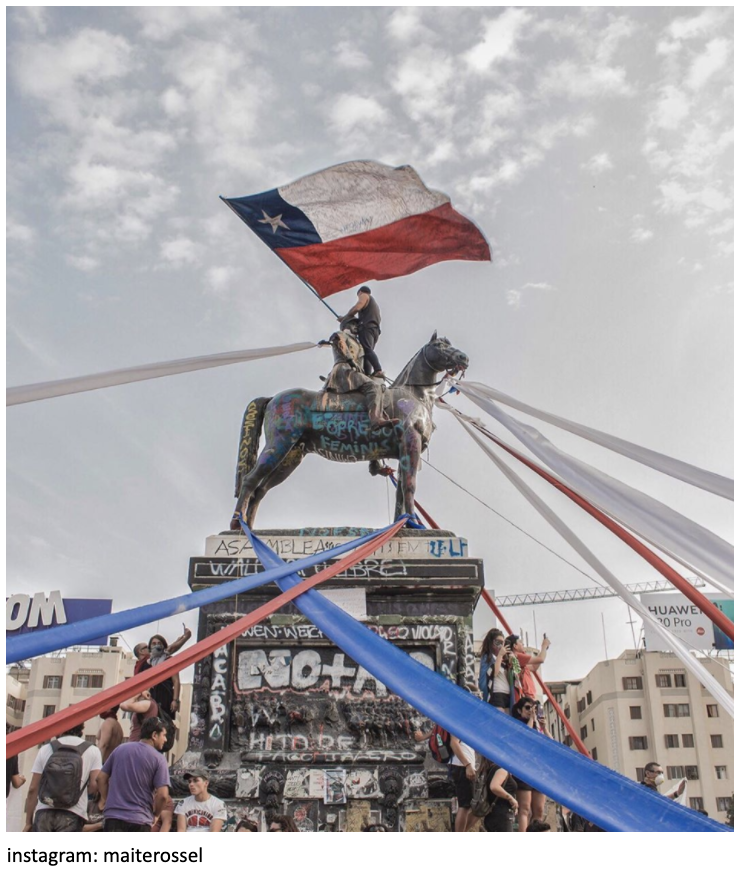 Chile’s Congress has agreed to postpone the constitutional referendum to October 25 to give the country time to deal with the COVID-19 crisis. To give you an inside view on what’s happening in Chile, we have interviewed Nacho Bustamante, a Law student in Chile.  During June, he spoke to us at length about the protests that erupted in October and quickly spread throughout the country. We are pleased to share the resulting ›conversation.

Q; Can you please summarize the current protests and their goal?

It’s about the un-responsiveness of the political system, which has been systematically undermined for decades. That is the bigger picture but there are many other issues. These include education, healthcare, the social security system, degradation of the environment by the economic model, and many other things that draw people to protest.  They are mostly systemic issues.

Q; What is the intended outcome? Is there legislation protesters want to be passed? Or are they just raising awareness in the government? What is the final goal of the protests?

The protests stopped as a result of the COVID pandemic. The government declared a state of emergency, including a curfew, until September. As a result of these measures, the military controls the streets and protests have ceased.  The final goal was to draft and approve a new constitution. In November last year, the Parliament announced a date for a referendum on reforming the constitution but the referendum has been postponed due to the pandemic.

Q; You mentioned that there haven’t been many disappearances but considerable police brutality instead. What has been the impact of this use of force? Has it resulted in deaths?

An independent report for the period October 18 to November 30, recorded 52 cases of sexual abuse by police, 5 murders, 197 cases of severe injuries (mostly caused by rubber bullets but also by live ammunition), tens of thousands of illegal detentions, more than 4,000 injuries and many attacks on journalists and paramedics.

Q; Can you please describe Chile’s economic model that seems to have sparked the protests?

We had a democratic system up to the early 70s, which was overthrown by the Pinochet dictatorship. The dictatorship set about dismantling the welfare state that the previous government was building and instead relied on the private sector for almost every aspect of social and economic life. It worked quite well for a while but since the 90s the system has deteriorated. Healthcare coverage is insufficient, the social security system established by the dictatorship is inadequate, people end up with really low pensions, wages are low, and a good education is unaffordable for most. Chile projects a very positive image to the outside world, one of prosperity and economic growth, but many people are angry because this is a false image.

Q; What has been the government’s reaction to the protests? Have they promised any policy changes?

Not much. The debate centered on whether to draft a new constitution. But there was no effort to address the use of violence by police and military. The government supports the security forces and denies that there have been human rights violations. They blame the protests on external actors. They have not admitted any faults and there seems to be no self-criticism.

Q; How are reporters being treated in Chile?

We have seen a lot of violence toward journalists and independent photographers by the police. It’s like they’re trying to stop freedom of speech, there’s no other explanation. Freedom of speech is systematically violated—damaging equipment, beating up journalists, even shooting at them, etc. This is mostly directed at independent journalists. Because most big media are owned by political interests, the government is trying to suppress the work of independent journalists. They want only journalists that work for big media companies to report on what is happening on the streets, so they are the only ones allowed to cover protest sites.

Q; How long do you think that these protests will last?

I don’t really have an answer. The government’s handling of the pandemic is really bad which allows them to control the social unrest. My guess is that when the whole COVID situation lessens, protests will probably start up again. At the very least there will be protests on October 18, which marks the first anniversary of the start of the social protests. It’s a very special day for everyone here.

What they can learn is to be careful. Don’t take unnecessary risks to protest or for the photo op. There have been many deaths and injuries in Chile because of the protests.

Q; What do you think Raise the Voices can do to help? What would you like us to do?

A good starting point is to expose the human rights abuses to an English speaking public. Raise awareness of the protests so that protesters feel they are not alone. Some of the protesters have links with international NGOs but many people in Chile feel isolated because of the lack of response from the government and its sanctioning of police brutality. Help protesters connect with other human rights protests and exchange views on how to make policy changes.

Mapuexpress  On the night of August 1, an organized group of people with sticks, stones, and torches gathered in the…

An Open Letter to the Mayor of Los Angeles on the Killing of David “Dizzy” Martinez.

To Eric Garcetti and others, I am a reporter with Raise the Voices, an advocacy journalism organization. We are writing…

The Mapuche Struggle: A Woman’s Perspective

Constitutional Reform in Chile and the Participation of Indigenous Peoples

Mapuexpress The Chilean Constitutional Convention would be the first, among all the continent’s constituent assemblies, to include direct representatives…

To: The Wichita Kansas City Council and The Wichita Police Department Hello, I am a reporter with Raise the Voices,…